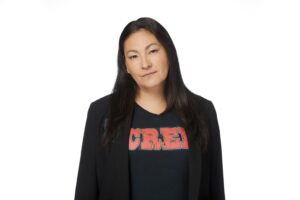 Rosanna Deerchild (she/her), host of UNRESERVED, is Cree, from the community of O-Pipon-Na-Piwan Cree Nation.

She has been a storyteller for more than 20 years — as a journalist, broadcaster and a poet. As the host of Unreserved, she shares Indigenous community, culture and conversation and is heard on CBC Radio One, Sirius XM and Native Voice One. Rosanna helped to create the CBC podcast called This Place, which reclaims Indigenous history in Canada.

An award-winning journalist and broadcaster, Rosanna worked at the Aboriginal Peoples Television Network, the Canadian Broadcasting Corporation, and wrote a regular national column on Indigenous perspectives.

Her debut poetry collection this is a small northern town shared her reflections of growing up in a racially divided place. It won the 2009 Aqua Books Lansdowne Prize for Poetry. Her second book, calling down the sky, is a collaborative work with her mother who was forced to attend residential school. She wrote her first play with the Royal MTC’s Pimootayowin Creators Circle called how to drink red rose tea.

A community builder, Rosanna co-founded the Indigenous Writers Collective of Manitoba to make space for Indigenous creative writing. Rosanna now lives and works in her found home of Winnipeg, Man.