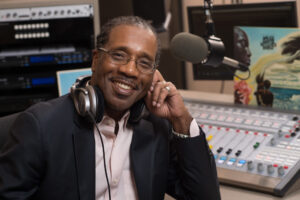 As a Jazz radio host, producer, program or music director for commercial and public Jazz radio stations, Chicago native John Hill has gained over 35 years of Jazz radio experience. His broadcast career started at Fisk University in Nashville, Tennessee, where he was instrumental in putting their Jazz-formatted radio station on the air. Afterward he served Detroit’s WJZZ as a staff announcer and Music Director for nearly a decade. John’s next opportunity brought him back home to Chicago, programming the popular Jazz and Gospel-formatted WBEE radio in suburban Harvey, serving Chicago’s south side. Also broadcasting at Northern Illinois University’s News and Blues-formatted WNIJ, John feels extremely fortunate to reprise the relationship with Jazz he describes as a calling. “Ever since, out of sheer curiosity, I bought an Ahmad Jamal LP from a neighborhood grocery store rack and discovered Jazz art, or maybe it was first hearing Nancy Wilson during one of [legendary Chicago Jazz radio announcer] Daddy-O Daylie’s shows…when the opportunity came to play this great music on the radio, it was really like the fulfillment of a dream. So now, joining the WFMT Jazz Network is both a privilege and a real pleasure,” he said.